It’s June 1, and I bet that all of you know what that means: Camp Doll Diaries! My dolls have been talking nonstop about all the fun and adventures they’ve had in previous years, and everyone was ready to go to camp last month! Before I show you what the dolls’ first day of camp held, here’s the winner of Who Wore it Best . . .

Savannah won by a landslide, with 27 votes total!

What do you think — should I do more Who Wore it Best posts?

OK, on to the photostory!

~Off to Camp Doll Diaries!~ 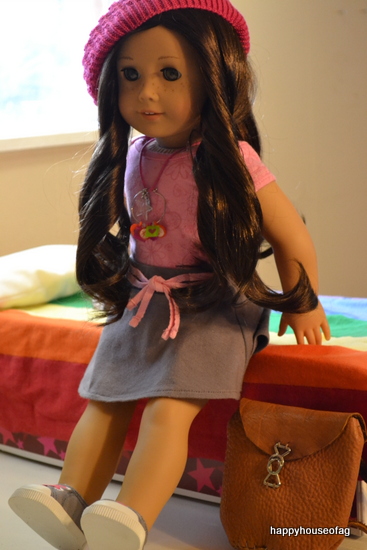 I sat forlornly on Ivy’s bed, watching as my adopted family rushed around, finishing their packing for Camp Doll Diaries. Stories about camp had been shared at dinnertime since April, and everyone was super-excited to go.

Everyone, that is, except me.

Sure, camp sounded great and all, but I was a little nervous. Who would my counselor be? Who would be in my cabin? What kind of activities would we do?

I had finished packing first, so the only thing I could do was sit around. I’d offered to help my sisters, but I couldn’t really help them pack. I didn’t know what they wanted to bring or where the items were.

Emily was putting her scrapbook in the bag she and Molly were sharing; Molly was groping around in her bed, searching for her old doll; Caroline was on the floor, cuddling the little Siamese cat that didn’t have a name; Ivy was sorting out which books she was going to take.

Ivy grabbed The Lightning Thief and placed it in her bag. With nothing else to do, I studied it. It was a white tote bag with the image of a smiling sun and the words “Camp Doll Diaries 2013” on it.

“That’s a cool bag, Ivy,” I commented, hoping to start a conversation.

“Thanks,” she replied, “but it’s not mine. It’s Tracy’s. She just let me borrow it for my books.” Ivy shoved the rest of her precious stories into the bag and zipped off.

Apparently talking to someone while they are packing is not really possible.

“Speaking of Tracy, has anyone seen her or MJ?” I asked the rest of my family.

Saige ran up the stairs and stopped in front of me, the sounds of Isabelle shouting about jewelry drifting after her.

“They went to camp early, I think,” Saige told me. “Tracy wanted to give MJ a tour.”

Finally all the packing was done, and after some very touching good byes to pets, we all went to the bus stop.

A special bus was waiting there: the Camp Doll Diaries Shuttle Bus. We all boarded and were on our way to camp.

My stomach was already filled with nervous butterflies, and it didn’t help that the bus driver, who didn’t like kids, ran over every pothole and swerved back and forth and slammed on the brakes on purpose.

An hour and a half of crazy driving later, we reached camp. The second the last girl got off the bus, the driver put all her weight on the gas peddle, shouting, “Not a pleasure to meet you!” 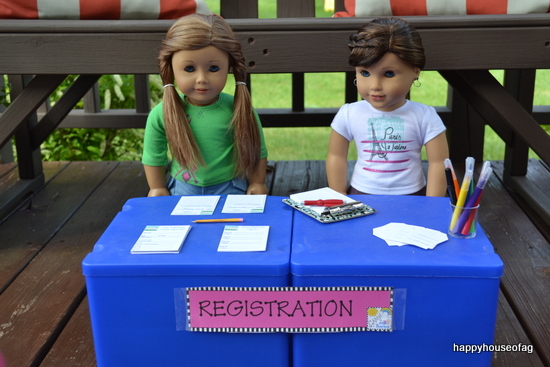 We headed toward the registration desk, but stopped when we saw who was stationed behind it: Tracy and MJ.

A sign beside the table proclaimed in brightly colored chalk, “Welcome to Camp Doll Diaries 2015!” 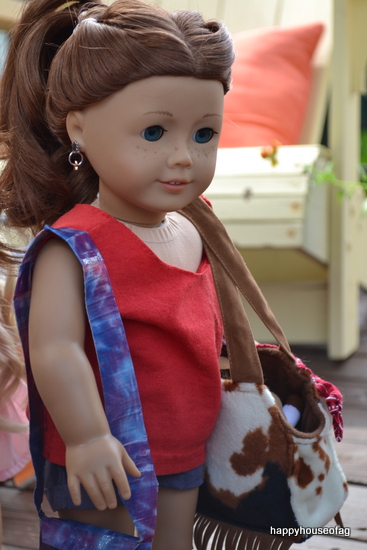 “Uh, what are you doing?” Saige asked. “Where are the real workers, or did they trust you to check in campers or something?”

“Something like that,” MJ said with a sly smile.

I wondered what they were up to. Nobody in their right mind would trust MJ and Tracy to do an important job.

I walked up to the registration table. “So if you’re checking us in, what do we do?” 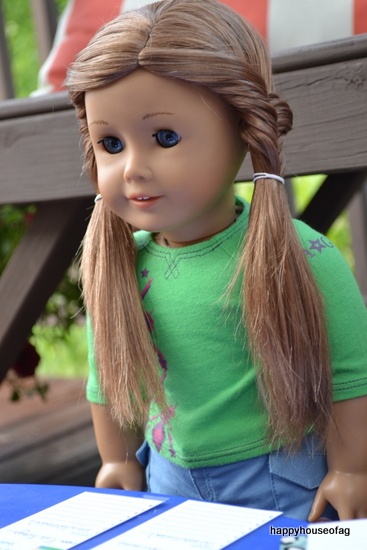 “A better question is: why are you wearing a hat in June?” Tracy replied.

“Because I’d be a bit cold without it!”

“OK, OK,” Tracy said. “Do you have your registration forms?”

Caroline stepped up and passed a stack of papers to Tracy, who handed them to MJ.

MJ took the papers from her best friend and scanned them lightning fast. “Please make a line,” she called out. 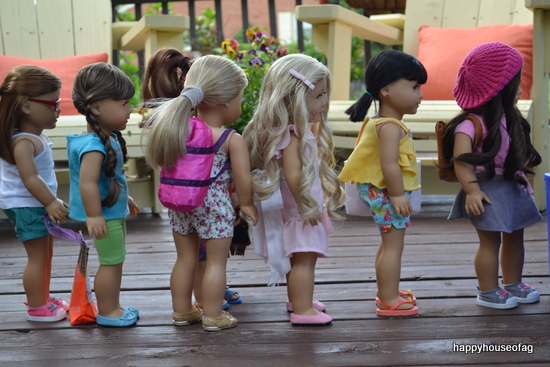 I was right next to the table, and Ivy was directly behind me, so the other girls stood single-file behind us.

“Fill out one of these,” Tracy instructed, tapping a pile of papers titled “Camp Doll Diaries Camper Information.” I picked up a pencil and quickly dashed out some answers.

I slid the paper across the table to Tracy and moved on to the next station, where I signed in. There were two lines for each camper — you wrote your name on one, and your cabin name on the other. But I didn’t know what cabin I was in, so after I’d written my name, I touched the second line and looked quizzically at Tracy. 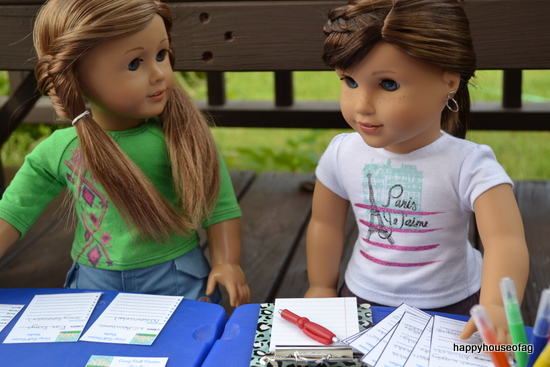 She met my eyes and then looked at MJ, who was reading the registration forms again. She whispered something in Tracy’s ear, then asked, “That OK?”

Tracy nodded and turned back to me.

“You’re going to be in the Fire Frogs cabin,” she told me.

I wrote the information down and moved on. 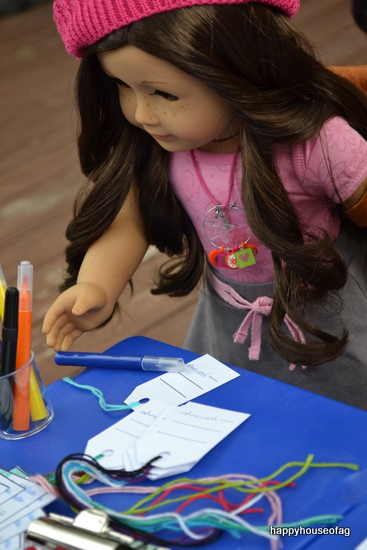 Markers and blank name tags were set up at the last station. Each name tag was strung on a different color of thread, and I picked a light blue one. There were three lines on the tag, but nothing told me what to write on each one, so I asked MJ.

“The first line is for your name, the second your cabin, and on the last one, you write how many years you’ve been to camp.”

“Nope!” Tracy exclaimed, dashing out from behind the table and putting an arm around Saige and Caroline. “You see, us three have been to camp every year it’s been around. This is our third year, so we’re third year campers. You’re a first year camper.”

A tiny wistful sigh escaped me as I watched those three. They were so relaxed around each other.

They’re the original trio, I reminded myself. They’d been around each other for a very long time.

I finished my name tag, making sure to write that I was a first year camper, and waited for everyone else to finish registering.

After Molly and Emily, the last in line, had joined the group of campers walking around in a slow circle because they had nothing else to do, MJ and Tracy skipped out from behind their desk, wearing name tags. Name tags that had the word counselor on them.

“Oh, yeah, that’s right . . .” they murmured. Then, with broad smiles, they exclaimed, “We’re your counselors!”

We stared in shock as MJ and Tracy continued to act like counselors, reading off of Camp Doll Diaries Rosters.

“My cabin is the Lil’ Rainbows,” MJ said. “If your hear your name, please gather on the right. Caroline, Isabelle, Saige, Ivy.”

Tracy read from her paper: “The girls in the Fire Frogs cabin are Savannah, Molly, and Emily.” 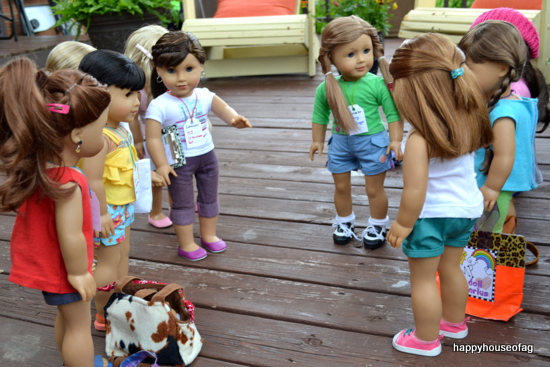 The Lil’ Rainbows girls on the right, the Fire Frogs on the left, our counselors lead us on a tour of camp.

It had just started to rain when we arrived at the cabin area.

MJ’s group rushed into their cabin and picked beds. 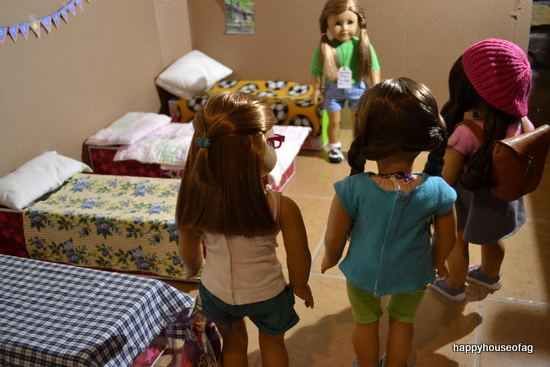 The rest of us followed Tracy into the Fire Frogs cabin. While our cabin didn’t have bunk beds and the bedding didn’t match, there was an open space that would be perfect for mini performances a turning cartwheels.

We were going to have a campfire, but our counselors canceled it because of the rain. The promised that we would have one tomorrow if the weather was nice, and MJ offered to play her violin for us. 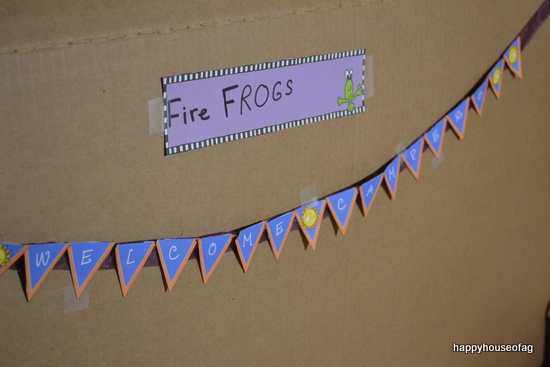 A purple sign on the wall had the name of our cabin written on it, and a banner beneath read “Welcome Campers.”

We all picked beds and unpacked some personal items.

Everyone was beat from the exciting day, so we went to bed early. We didn’t even bother to change into our pjs. (When MJ texted Tracy with the message that “MJ doesn’t want to wear her pjs,” I couldn’t help but make a connection with the words “MJ” and “pj.” In my mind, I called the other counselor PJ MJ.)

As I started to fall asleep, I reflected on my day. At first I had been nervous about going to camp, but now, even though I’d only had one day at Camp Doll Diaries, I was sure I’d be looking forward to going next year. Only one thing annoyed me: that fact that Tracy could tell me to go to bed and I’d have to. 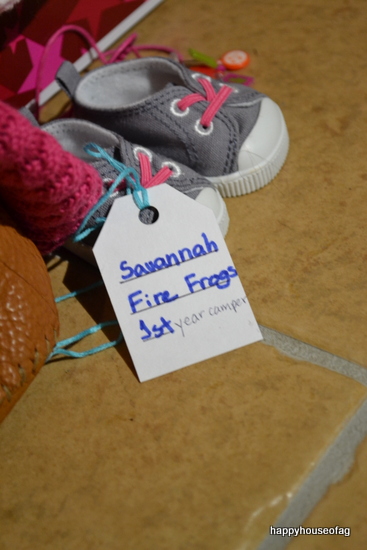 I thought about my best friend Cass. Perhaps she would be living with us by next summer, and I, a seasoned second year camper, would be able to tell her all about camp and give her a tour.

I fell asleep, dreaming about all the fun I’d have at Camp Doll Diaries.

23 thoughts on “Off to Camp Doll Diaries!” 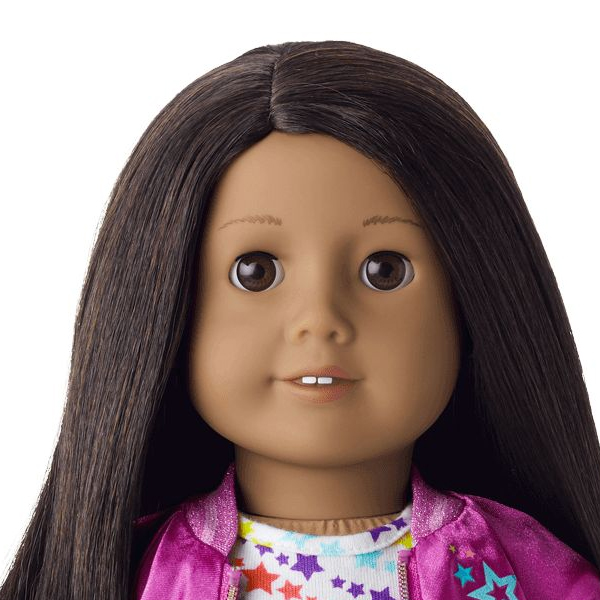 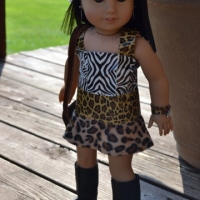